Get a Free Simulation Report And find out how much you could save! 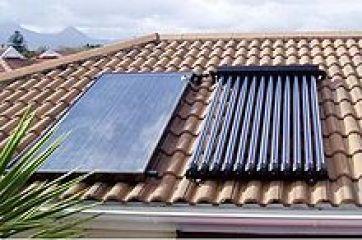 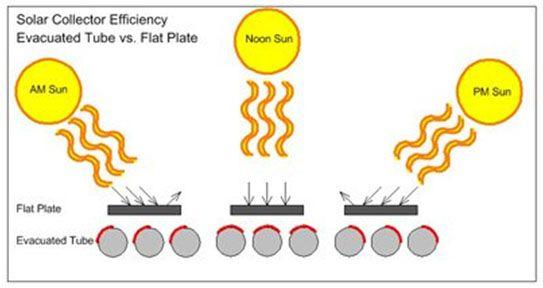 Besides being the most efficient solar collector at absorbing the suns energy, solar vacuum tubes have other advantages. With Flat plate solar collectors the solar rays strike the panels at an oblique angle during the early and late parts of the day and are only perpendicular at midday. Calculating the angle of a solar collector plays an important part in the flat panel's performance. Solar angles (the angle at which the panel meets the sun) plays very little role with solar vacuum tubes as the sun is always striking at an optimum angle.

Because of the pure vacuum, there is virtually zero heat loss. This is evident by touching a glass vacuum tube which is cold while the liquid inside can be boiling. Almost 94% of the suns energy is directed to the inside of the tube and is captured. Flat panel collectors will always loose heat through the glass, and become less efficient at higher temperatures.

The Advantages of solar vacuum tubes with copper heat pipes have a further benefits over other solar systems in that they can be scaled down by unplugging a couple heat pipes. Because the internal heat transfer fluid is isolated, removing a tube will not shut down the system. This allows for some seasonal control. In the summer month you may find the solar system produces too much heat, you can simply unplug a number of the tubes to scale back the output. This also means that a broken vacuum tube will have little effect on the operation of the system.

Solar Vacuum tubes can operate at a much higher temperature and as such are the preferred choice for solar home heating applications as well as solar space heating, solar process heating, solar air conditioning, and commercial solar heating applications. The growth world wide for solar vacuum tubes is growing exponentially and is expected to surpass flat plate collectors within the next 5-10 years. Currently Asia used 95% evacuated tubes in solar applications and Europe is quickly adopting vacuum tubes in areas such as home heat and even solar air conditioning. 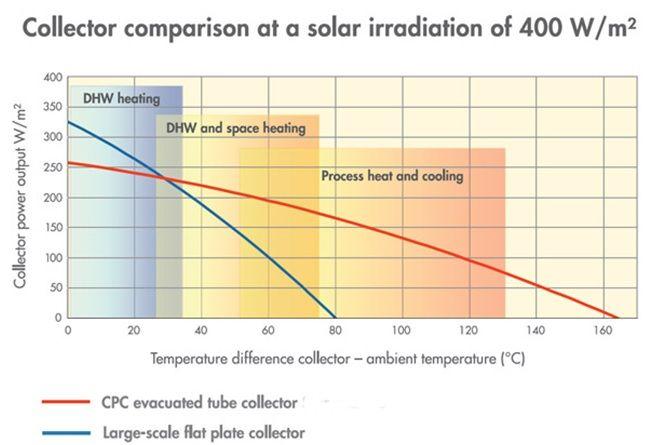 Evacuated Heat Pipe Tubes
The collector is hermetically sealed inside an evacuated glass tube, eliminating convection and conduction heat losses and isolating the collector from adverse ambient conditions. Therefore, no heat losses due to convection and conduction and no change of performance during the service life of the collector due to corrosion.
per month
Uses a heat-pipe for super efficient heat conduction. No water enters into the collector.
Thermal diode operation principle. The heat pipe’s thermal flows one way only; form the collector to the water and never in the reverse.
Corrosion and freeze free; there is nothing within the evacuated tube to freeze and the hermetic sealing of each tube eliminates corrosion. The insulated manifold header and can withstand sub zero temperatures for a short period.
Easy installation and no maintenance. Lightweight individual collector tubes are assembled into the system at the point of installation. Each tube is an independently sealed unit requiring no maintenance.
Relatively insensitive to placement angle, allowing architectural and aesthetic freedom.
Flat-plate Solar Panels
The collector is put in a casing with a glass shield to reduce heat losses. The air gap between absorber and cover pane allows heat losses to occur, especially during cold and windy days. Build up of condensation will in due course influence the collector greatly due to corrosion, reducing performance and durability.
per month
Circulates water inside insulated areas. Prone to leakage, corrosion and restriction of flow due to possible air lock.
Flat-plates can actually rob the water of built up heat if the collector becomes colder than the water temperature.
Flat-plate collectors are vented and as such the copper piping is surrounded by colder air and lose contained water and unless well protected can burst upon freezing. Corrosion can become a major problem reducing performance!
Installation is difficult. Entire panels have to be hoisted onto the roof and installed. If one has a leak, the entire collector has to be shut down and removed.
Requires accurate southern exposure and elevation placement.